I love long distance motorcycling. It gives me a chance to unwind after the school year finishes and to explore new sights. 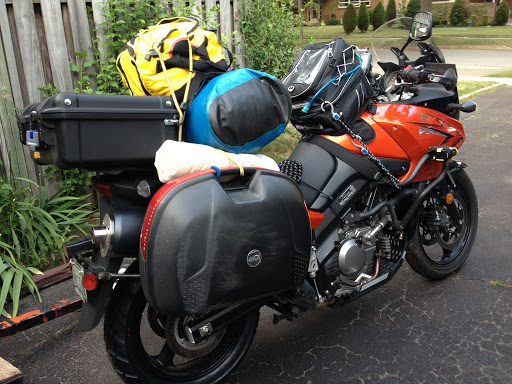 Yup, that’s a lot of stuff! For the ride I was going on in that picture, I was heading out on a 17,000 km trip that included a conference in southern California, some photography, and camping.

Back in 2006, I had spotted a prototype of a motorcycle trailer in Port Dover that captured my eye enough to take some photos of it. I thought it was unique in that it only had one wheel, which I felt would handle better than a traditional two-wheeled trailer provided that the hitch assembly and trailer were engineering properly, i.e., really stiff. 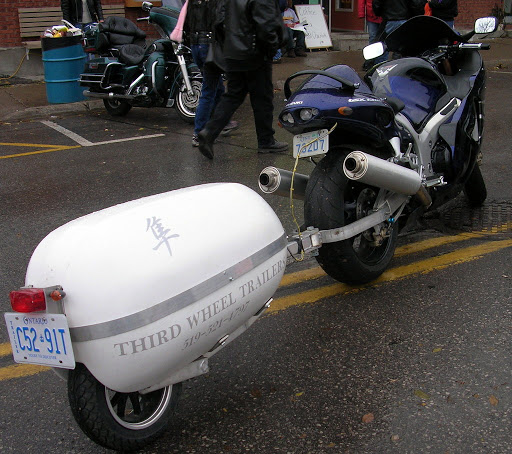 The trailer was the brain-child of Juan Wall, who wanted to do some long distance travelling of his own. Not seeing any suitable trailers for sport bikes, he decided to design and build one.

Fast forward to the 2017 Motorcycle Supershow in Toronto, and there it was again, but this time in production form. (That’s Juan behind the trailer.) 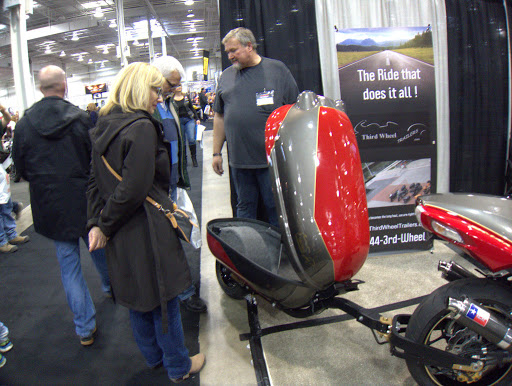 The quality of the trailer looked really great and the hitch assembly looked solid—I was intrigued. We had a conversation about pricing and delivery, and I went home to think about it.

Without a doubt, it’s not a minor investment. If you check the website, you can see that the price is not for the casual rider. The base model, the CP550, is almost $2400 ($CAD). The larger CP650, which adds 3-1/2 inches height to the base of the trailer, is almost $2700. The hitch and accessories are extra. This is a serious investment only for those that plan to use it year after year. Which I do.

(I decided I wanted the larger CP650 for its extra load capacity.

A few emails and phone calls back and forth, and a deal was struck. I was to take delivery at the factory (in Belmont, Ontario) around the end of the school year, which would work out great for the trip I had planned at the beginning of July. I wanted white, one of the base colours (the other being black), for maximum visibility. The only option I wanted was the sport bike hitch, a necessity ($349), which had to be custom manufactured for my specific model of bike.  You can also order a cover ($130), a bungee net ($45), and some other accessories, but I decided to do without. I may regret not installing the stone guard ($150) as I often find myself on dirt roads.

Here’s my bike being put on the hoist to prepare it for the wiring and mechanical modification:

The only mechanical modification that was required was to clean out the centre of the axle with a drill bit to accommodate an insert that the hitch would mount onto.

The installation took about four hours, but that included the time to manufacture a new hitch. Normally the installation would probably be under two hours.

Here’s my bike with the new trailer attached:

My first reaction when pulling out of the parking lot was how stiff the low-speed steering had become. The pivot point that allows the trailer to move laterally is purposely designed to be very tight. I initially didn’t understand why this was necessary, but after many miles in crosswinds easily exceeding 40 km/h, I’m thankful it is.

Surprisingly, I found that  the handling of the bike with the trailer in crosswinds was better than without. The V-Strom is not known to be a great bike in crosswinds, partly because of its high centre of gravity and also because of its fork design. A fork brace helps considerably, as does relaxing the arms and just “riding with it”. Interestingly, the trailer made crosswinds much more bearable.  If I had to guess why I’d say the extra wheel helped the motorcycle to track in a straight line better but also that the trailer lowers the overall center of gravity.

In terms of how fast you can ride, I found that I did ride slower than normal, understandably, but when I needed to bump up the speed to say, pass a car, it was almost like the trailer wasn’t there. Cruising at 120 km/h (actual, not indicated) was not a problem at all.

My overall gas mileage average on this bike is 56 imperial mpg (5.0 l/100 km). On my trip to Gaspe with the trailer installed (~4000 km total) it was 60 mpg (4.7 l/100 km). The likely reason it was better than normal was that I was driving and accelerating slower. Conclusion? The trailer has negligible effect on mileage.

When I got home from this trip I decided to weigh all the luggage in the trailer as well as determine the tongue weight (at the axle), with and without the luggage.

The tongue weight with the luggage it was 46 lbs and 20 without, a difference of 26 lbs. The luggage weighed 58 lbs, so approximately 45% of the luggage weight was felt at the hitch. This initially seemed high, but it’s not surprising considering all the open space in the trailer is towards the front where it would have the most impact. Since the bike itself weighs about 500 lbs wet, the tongue weight was approximately 9% of the bike weight, which compared to car standards seems like a reasonable amount. (Yes, I think about things like this…)

I only had a few glitches with the trailer. The first was that the lock mechanism quit working. I called Juan about it and he promised to replace it (and did), with no hassle whatsoever. The second was a little more troubling, but it was something I was warned about when the trailer was installed. They warned me that when the bike goes over a big bump that the rear fender may impact the hitch. They recommended I trim a few inches off the fender. Well, they were right. You’ll see from the picture below that I should have heeded their advice. Fortunately I had a sawblade attachment on a utility knife I was carrying so I cut off a few inches off the bottom of the fender and that solved my problem.

Overall, I’m very pleased with my new trailer. The quality (lock mechanism notwithstanding) is excellent and I feel it will last me many years. Yes, it was pricey, but for me it was well worth it considering the quality, the ride handling, the ability to carry much more luggage, and the overall support I received from Third Wheel Trailer when deciding on the purchase and afterwards.

This site uses Akismet to reduce spam. Learn how your comment data is processed.